This post is coming a little late in the month – October seems to have just gotten away from me! I wasn’t super crazy about the choices this month, but I did make a selection AND I added an extra that I’ve been highly anticipating for a while now. I finally caved and added it to my box. Here are the books I picked: 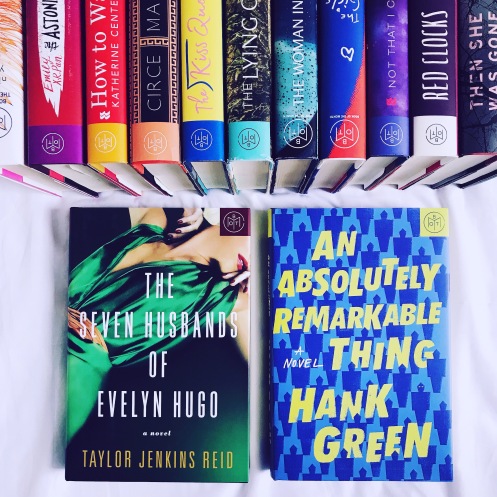 The Carls just appeared. Coming home from work at three a.m., twenty-three-year-old April May stumbles across a giant sculpture. Delighted by its appearance and craftsmanship–like a ten-foot-tall Transformer wearing a suit of samurai armor–April and her friend Andy make a video with it, which Andy uploads to YouTube. The next day April wakes up to a viral video and a new life. News quickly spreads that there are Carls in dozens of cities around the world–everywhere from Beijing to Buenos Aires–and April, as their first documentarian, finds herself at the center of an intense international media spotlight.

Now April has to deal with the pressure on her relationships, her identity, and her safety that this new position brings, all while being on the front lines of the quest to find out not just what the Carls are, but what they want from us.

Why I Picked It:

I actually don’t really have a great reason for this one. Like I mentioned, I wasn’t that crazy about the selections this month. I am not big on historical fiction, and I am completely buried in mysteries/thrillers that I have not yet touched (for some reason, BOTM has been obsessed with historical books and thrillers lately?). The final choice was a contemporary, and honestly I don’t even want to look at a contemporary after Contemporaryathon this year. They’re more of a summer read for me, anyway. Which left: this one.

I really don’t read that much sci-fi, but as I’ve mentioned in the past, I try to use BOTM to step outside my reading comfort zone a bit. The deal is so good that if I don’t like the book, I didn’t really waste that much money. Hopefully I’ll enjoy this one!

The Seven Husbands of Evelyn Hugo by Taylor Jenkins Reid

Evelyn Hugo is finally ready to tell the truth about her glamorous and scandalous life. But when she chooses unknown magazine reporter Monique Grant for the job, no one in the journalism community is more astounded than Monique herself. Why her? Why now?

Monique is not exactly on top of the world. Her husband, David, has left her, and her career has stagnated. Regardless of why Evelyn has chosen her to write her biography, Monique is determined to use this opportunity to jumpstart her career.

Summoned to Evelyn’s Upper East Side apartment, Monique listens as Evelyn unfurls her story: from making her way to Los Angeles in the 1950s to her decision to leave show business in the late 80s, and, of course, the seven husbands along the way. As Evelyn’s life unfolds through the decades—revealing a ruthless ambition, an unexpected friendship, and a great forbidden love—Monique begins to feel a very a real connection to the actress. But as Evelyn’s story catches up with the present, it becomes clear that her life intersects with Monique’s own in tragic and irreversible ways.

Why I Picked It:

I have been dying to get my hands on this book, especially after Melanie @ Meltotheany and Amy @ A Court of Crowns and Quills rated it so highly. Everywhere I turn I hear good things about this book, so I resolved to add it to my next box – except it was sold out. When I was putting my October box together, I noticed they’d added more and I JUMPED on it. I wasn’t going to pass up that opportunity again. I am dying to get to this book, but unfortunately I’m not sure if it’ll happen before the end of the year. I’m currently working on putting a list together of books I MUST get to next year, and you better believe this book is on it.

If you haven’t tried Book of the Month yet, I highly recommend it! You can use my referral link here and I think you get a free book out of it.

I'm a late 20-something physical therapist living in Michigan with my hubby who loves reading and reviewing books, running, wine, and dogs. View All Posts

4 thoughts on “October Pick: Book of the Month”

Books, book hauls, book reviews, and so much more!

Reading my way through life.

The one where i ramble about my reads

A YA Book Review Blog

Plenty of Books & a Few Bobs!

Stories and photos from Scotland

Inspired by Books, Fueled by Coffee